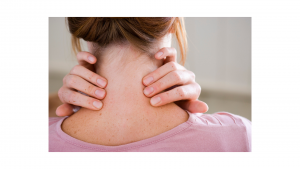 Consisting of a series of bones (vertebrae) stacked on top of each other and allowing movement between the head and trunk. It allows the head a large range of movements including a combination of bending forward and back, turning, and tilting side to side. It also houses the spinal cord.

Sometimes the neck can refer symptoms into the shoulder, jaw, or head.

It relies on the interactions between joints, muscles and ligaments for stability