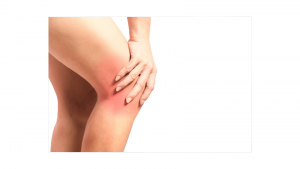 A hinge joint allowing you to bend and straighten the knee. It is made up of 2 joints. The first, the tibiofemoral joint, is the joint formed between the thigh bone (femur) to the shank (tibia). The second, is the patellofemoral joint with the kneecap (patella) sitting on top.

Stability in the knee is provided by an interaction between muscles, ligaments, the joint capsule, and the meniscus.